When an idea has legs, it takes on a life of its own. It’s embraced by others who champion, embellish, and “own” it while still keeping its central core intact. An idea with legs is every marketer’s goal, every time.

CitiFinancial, Canada’s leading alternative lender, had run a “Customer Appreciation Days” campaign for years. Giveaways and prize draws included gift cards and other small incentives, but the contest was losing steam with both customers and internal teams. For 2015, the CitiFinancial Marketing Team wanted to revamp both the campaign and the prize and opted to move from several smaller prizes to something much more enticing—the full value of 10 customers’ loans up to $10,000. So when CitiFinancial asked us to come up with a new theme for the contest and campaign tactics, we knew we needed something special. An idea with legs.

The concept had to be big and bold while still being true to the sincere and empathetic CitiFinancial brand.

The concept had to be big and bold while still being true to the sincere and empathetic CitiFinancial brand. It had to have longevity, anticipating it would run and evolve over several years. It had to be scalable, working on everything from modest statement ads to oversized in-branch posters. Most importantly, it had to motivate customers and prospects to apply for a loan, either through CitiFinancial’s online portal or at the customer’s local branch.

The creative concept was born from a deep understanding of the brand personality and a ‘think out loud’ brainstorming session. “If you win the value of your loan, is it even a loan at all?” Eureka! A loan you don’t to pay back? It’s basically the “BEST. LOAN. EVER.”

The CitiFinancial Marketing Team was immediately drawn to the boldness of the “BEST. LOAN. EVER.” And they liked the implicit intrigue the idea raised—for most readers, the words “best” and “loan” don’t often appear in the same sentence, and when they do, it begs an explanation. When the reader engages with the apparent contradiction, they realize there’s no hyperbole here, just an authentic description of the contest prize.

To bring the idea to life, we needed larger-than-life creative that matched the substantial prize.

To bring the idea to life, we needed larger-than-life creative that matched the substantial prize. As fun as it was to dream up scenarios that involved vacations, lavish renovations and new cars, that approach didn’t fit with the CitiFinancial mandate of responsible lending. The creative team quickly shifted gears, developing high-fidelity illustrations that depicted realistic lending situations like home repairs and upgrades. 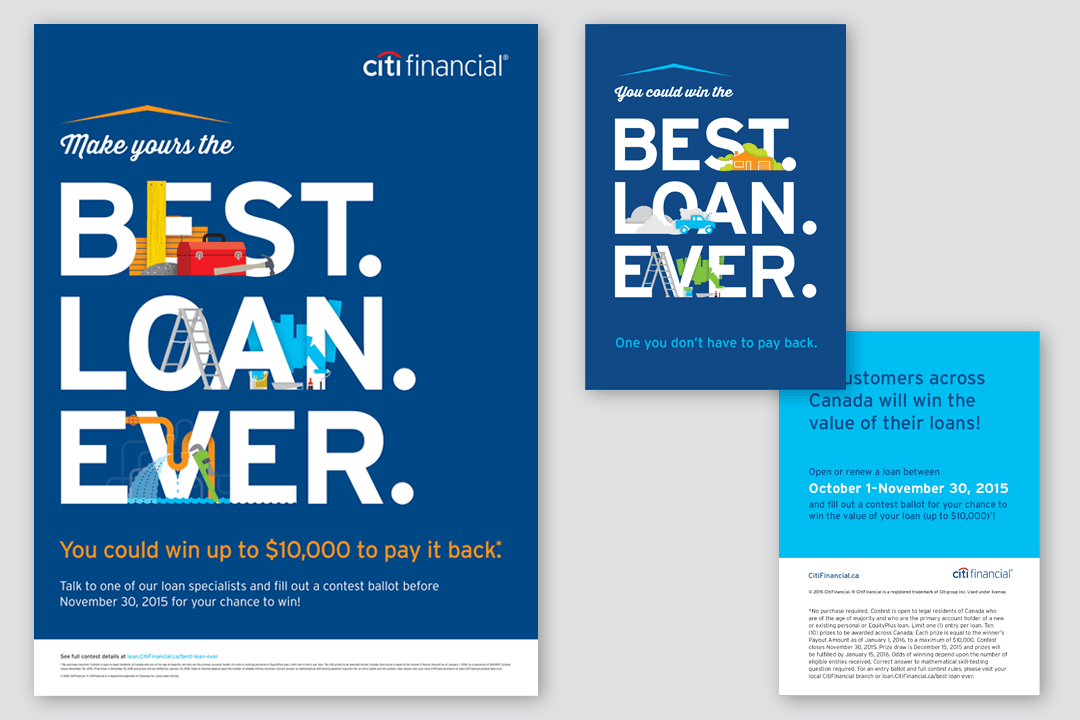 The contest rolled out across Canada in the fall of 2015, promoted in more than 200 CitiFinancial branches using posters, tent cards and calendar giveaways (“BEST. YEAR. EVER.”), email, direct mail and statement ads, all leading to a contest microsite encouraging people to participate by applying for a loan. 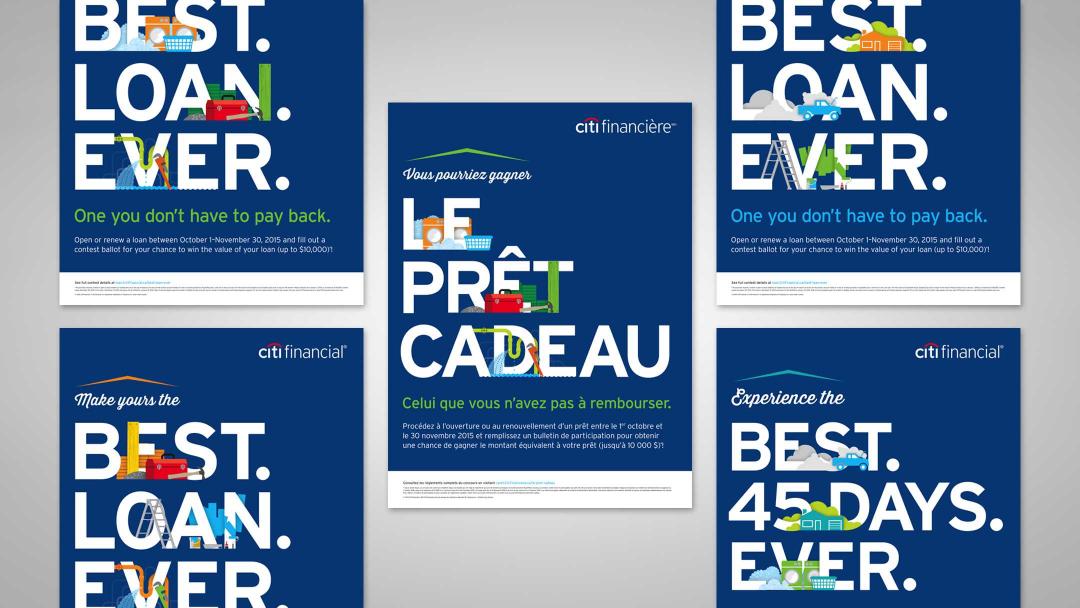 The revitalized campaign contributed to strong loan activity during the contest period and was particularly successful in driving traffic through CitiFinancial’s newly established digital channels. November proved to be the highest month of the year of booked loans from paid search efforts—a result the CitiFinancial Marketing Team attributes to the digital campaign tactics. And the winners? Ten lucky customers from across Canada won the value of their loans. Their stories—including their enthusiastic reactions and plans for the winnings—were highlighted on the microsite.

Of employees, 96% said they were highly engaged and actively promoted the contest to customers.

Perhaps even more rewarding was how vigorously the whole CitiFinancial organization embraced the campaign. Of employees, 96% said they were highly engaged and actively promoted the contest to customers. In the field, CitiFinancial teams took the “BEST. LOAN. EVER.” concept and truly ran with it. Under the banner of “BEST. LUNCH. EVER.” teammates joined together for a high-energy working lunch. At the branch level, they shared customer-service tips as part of the “BEST. TIPS. EVER.” initiative. And the list goes on––”BEST. PURCHASE. EVER” (a retail services customer contest); “BEST. WINDOW. EVER” (a retail services employee contest); “BEST. BOSS. EVER” (a heartfelt Christmas card!).You get the idea…

The “BEST. LOAN. EVER.” contest will run again in spring and fall 2016, with legs that will likely go on for years to come.

Nicki Munro, Chad Krulicki, Jon Kutt, Frances Ranger and Karen Ruske helped this once-easily-overlooked customer-appreciation contest live up to its promise as the “BEST. LOAN. EVER.”