When a decision “just feels right,” we’re much more likely to act on it. Perhaps surprisingly, that gut level of certainty can be even more influential in decisions than a pile of objective data.

For the agribusinesses Syngenta Canada serves, factual evidence (including field trial data) is an absolute requirement. No question. But when asking growers to consider a newer, less familiar option in planning their 2016 canola seed choices, the Syngenta marketing team may have tapped into the power of certainty as well.

…people who are certain of their beliefs are more likely to buy, buy sooner, and spend more.

A Harvard Business Review article, “How Certainty Transforms Persuasion,” discusses the science of certainty and how “people who are certain of their beliefs are more likely to buy, buy sooner, and spend more.” It describes four levers that companies can use to boost certainty: consensus, repetition, ease and defense.

While the Syngenta team was purposefully seeking to foster engagement with their growers, the resulting email campaign strategy also pulls on the “consensus” lever—the fact that people become more certain of their opinions when they think that others share them.

In a series of emails, growers were asked to voice their opinions in a credible, comfortable, shareable way. A simple poll within each email made it easy for them to respond. The questions were featured in the body of the email and could be answered directly from there.

The questions asked growers a range of topics about their canola crop, from how they evaluate its success to how they are planning on mitigating the risk of certain diseases next season. Once they shared their answer, growers were taken to a landing page that featured the poll results as well as a video related to the poll question.

For Syngenta Canada, listening to their customers is second nature. Asking their customers to share their opinions with each other not only encourages brand engagement; it can also build the kind of certainty that drives results.

Tristan Holmberg and Katharyn Feher are just a couple of the people at Quarry who helped Syngenta bring this campaign to life. 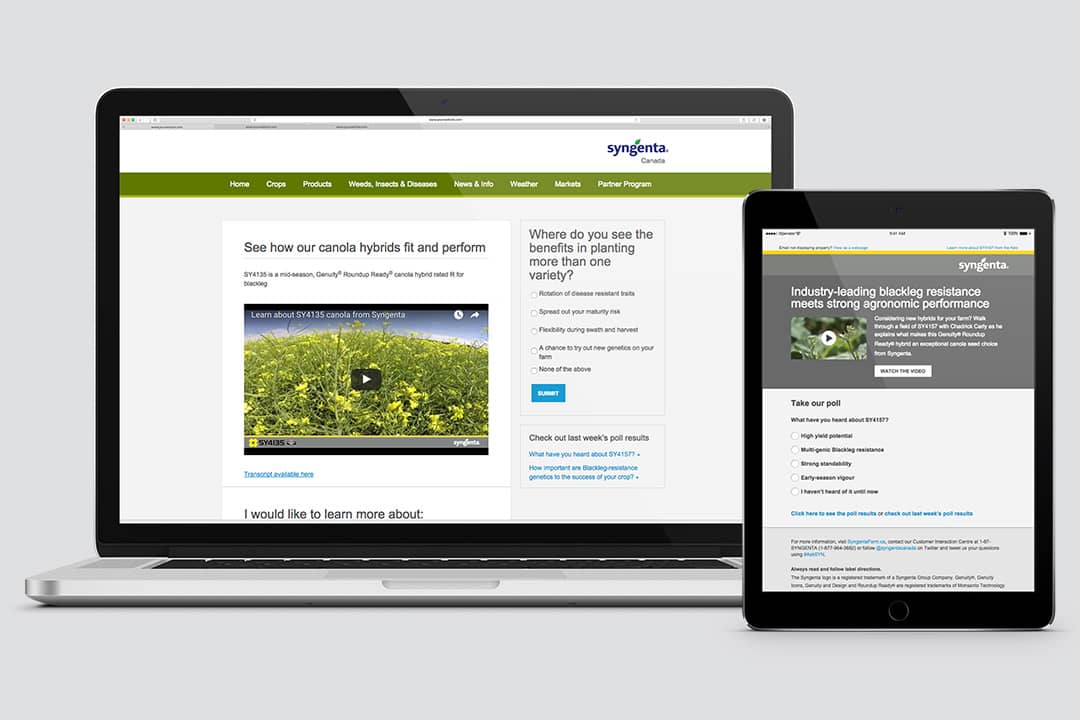