It’s no surprise the media world is ever evolving. This is even more true for B2B media channels as new technologies arise, restrictions on data and privacy increase and advertising platforms continue to refine their offerings. Looking ahead to 2023, we’ve got our eye on four key B2B media trends. All of these trends have one thing in common: they invite marketers to break with tradition and rethink the approach to execution, evaluation and optimization of media investment.

Looking ahead to 2023, we’ve got our eye on four key B2B media trends. All of these trends have one thing in common: they invite marketers to break with tradition…

Social media has been at a considerable advantage to other media channels in terms of the amount of data they have been able to collect on users. Meta’s entire advertising model was built on a trove of information that users were quite willing to share on the platform. All of these signals enabled Facebook to develop one of the world’s most powerful algorithms that could model and predict with incredible accuracy and, most importantly, at scale.

The release of iOS14.5 by Apple in April 2021 killed this almost in its entirety with its App Tracking Transparency framework. This update enabled users to opt out of tracking by apps when not in use, with 85% of users in the US opting out of tracking in the first months since release. This seismic loss of data was a direct hit to Meta’s advertising business—advertisers, in response, pared back their investment on the platform, with losses expected to be $10 billion in 2022.

It is no surprise, then, that Meta has started to shift its focus to B2B marketers, recently announcing new audiences that are built to target decision makers.


Critically, this shift allows a platform to harness all of the data it does have access to, in-app. Meta can override the limitations it has faced for B2C marketing—and with millions of businesses on the platform, expect it and others to continue to build out advertising offerings to incorporate more tools and targeting options specifically for B2B.


Trend #2: The Shift to Person-based Advertising

As B2B platforms grow in sophistication in the data they are able to access and model, there is a shift in how advertisers are targeting their ideal prospects. Typically, digital B2B campaigns have been reliant on tracking pixels left on devices to connect to their customers. They then leverage this digital footprint to remarket audiences to push for conversion to lead. This has typically been a net-casting exercise, with potential for inefficient spend. ABM sought to remove inefficiencies by being more focused on specific accounts and roles but is still heavily reliant on tracking pixels. The main issue with tracking pixels is that they are focused on devices, not people.

Platforms like Influ2 and Demandbase have further refined targeting capabilities to allow B2B marketers to deliver ads directly to specific decision makers at your target accounts. This means that prospects are identified as individuals and not devices. Data collected from various online and offline sources is leveraged to develop deep customer profiles that can be targeted across channels.


One of the key benefits of this approach is that B2B marketers are no longer shackled to platforms that satisfy ABM targeting and reporting needs. Advertisers can now deliver hyper-targeted ads to prospects on platforms that would be primarily leveraged for B2C advertisers, with reporting at the individual level.

Another B2B media trend we’ve got our eye on for 2023 is the growth of Connected Television (aka CTV or OTT). While cord-cutting has been an ongoing trend, it saw a significant uptick during the pandemic. This trend is expected to carry forward into 2023 with a predicted 43 million households opting to cut the cord. CTV reaches an estimated 231 million viewers in the US. The same pattern is even more pronounced in Canada, where it is estimated that only 46.7% of households will have traditional paid TV services in their home by the end of 2023. 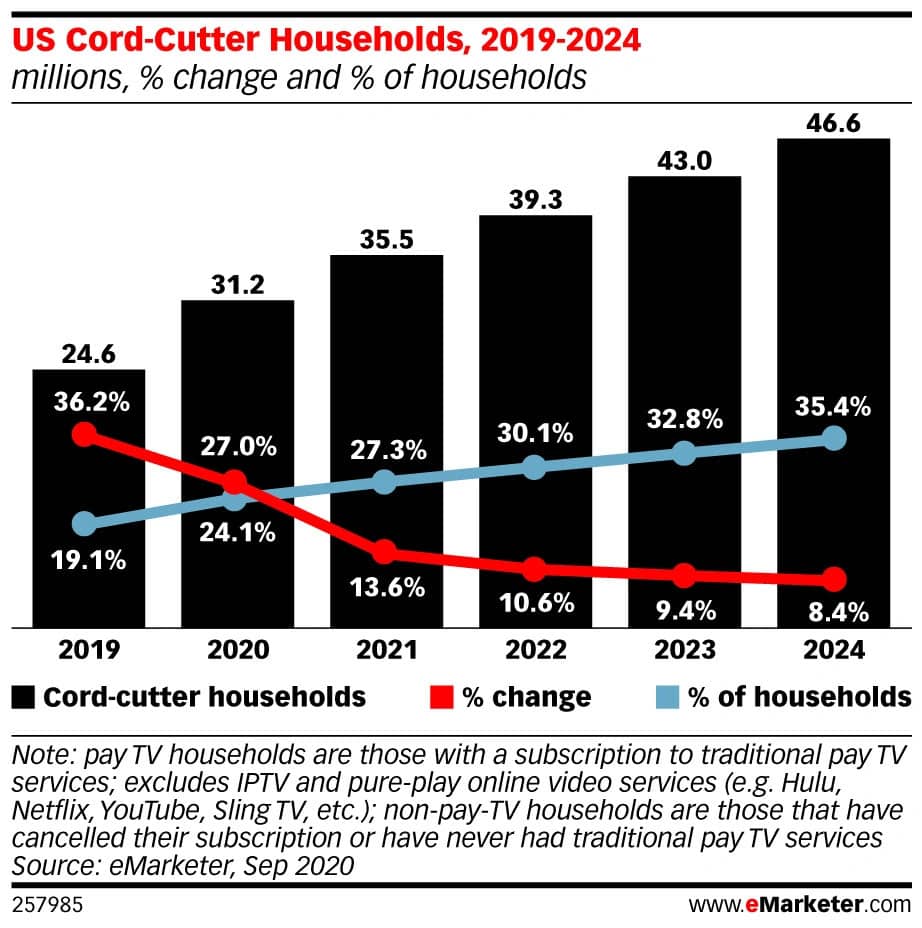 As a result of this increase, most streaming video services are reporting growth in viewership, and advertisers are responding in kind. Investment in CTV advertising saw a growth of 41% YoY in 2020, and is predicted to represent nearly 7% of total media spending in the US in 2023, or $24.2 billion. This makes CTV the fastest growing sector of the digital advertising industry today.

B2B marketers are already jumping on this trend. A Sirista survey of B2B marketers conducted this past spring found that 52% reported they were “highly likely” to add CTV to their marketing mix in the next 12–24 months. CTV marries the power of a traditional TV execution with some of the functionality that can be lacking: placements are data-driven and able to be purchased at the individual impression level, content is on-demand and typically forced-view with shorter commercial clusters, combined with the ability to track delivery and actions taken. At Quarry, we have already started testing the CTV waters, and expect this channel to continue to play a bigger role in clients’ media plans.


While there are some challenges to CTV advertising in the B2B marketing industry, it is important to remember that media doesn’t work in a vacuum—that there is a relationship between channels greater than the sum of its parts, known as the multiplier effect. The multiplier effect is the increased combined effectiveness of advertising appearing on two or more channels at the same time. Most attribution models don’t take the multiplier effect into account, which often discredits the contribution of channels without directly attributable performance. Attribution models should be adjusted to be multichannel and multitouch to account for the impact that media channels as a whole have on delivering results.

A recent Forrester report on optimization of B2B digital media campaigns took an in-depth look at how traditional optimization techniques might actually be harming the efficacy of B2B campaigns.


Traditional optimization in digital marketing has been built on two flawed premises:

This focus on quantity actually had a negative impact on quality, and resulted in campaigns that, while driving a lot of volume, didn’t generate high-quality conversions. The report argues that flawed optimization practices should be replaced with one that looks at efficacy and value, not volume and efficiency, known as a maximization model.


Building upon the multiplier effect discussed for CTV, the report also supports expanding the aperture of analysis to account for indirect influence of media channels. When translating a metric like click-through rate (CTR) into actual numbers, we see that an average CTR for a display banner of 0.10% actually means 1 person in 1,000 clicked on the ad. There were, however, 999 others who were exposed to the ad who didn’t click. Traditional optimization would favor a placement that sees higher than average CTR, focusing on the few that clicked while ignoring the vast majority who didn’t. The attention is on the action of clicking, not the desired action of the campaign (such as filling out a form).


By flipping the approach on efficacy rather than efficiency, the maximization model looks at the campaign as a whole. Analysis is focused on the outcome, not the individual parts. Rather than optimize media channels for the greatest volume at the lowest cost, the model looks to focus on how effective the channels are at driving the objectives of the campaign. What might initially appear to be a less efficient campaign actually sees better results from a conversion perspective. By removing efficiency from the equation, the focus shifts to quality and better outcomes for media investment.


In conclusion, an exciting time for B2B media

These trends all underscore the need to reevaluate traditional media approaches in B2B marketing. As platforms evolve, so does the need to refine how media is planned, executed and optimized. Whether it’s testing new targeting options on what are typically traditional B2C channels, reshaping how performance and attribution are measured, or changing bad optimization practices, breaking free of the status quo enables marketers to uncover untapped opportunities in a fragmented and complex media landscape.